This month sees the first exact square between Saturn in Aquarius and Uranus in Taurus along with a very super-charged New Moon that highlights this aspect.

The New Moon in Aquarius chart contains 6 of the 10 major planets in Aquarius with the Sun, Moon, Mercury retrograde, Venus, Jupiter and Saturn all in Aquarius, and all square to Uranus, the Black Moon Lilith or Mars in Taurus. There is plenty of potential for heightened conflict here along with heated and dogmatic exchanges so try to stay calm and not put yourself in a polarized, contrary position.

May the Gods and Goddesses Bless You
Christine
Email: christinerothwell@outlook.com
Website: www.christine-rothwell.com

Contents
February begins with only Mercury retrograde. Note: All the dates below are for Australian Eastern Daylight Time.
Mercury Retrograde: January 31 to February 21  …and leaves the retrograde loop on March 13.
Mercury stationed retrograde on January 31 at close to 26 degrees of Aquarius and remains retrograde until February 21 when it turns direct at close to 11 degrees of Aquarius. The peak moment in the cycle is when Mercury conjuncts the Sun on February 9, a great time for meditation, inner work and opening ourselves to new mental perspectives and truths.

Mercury’s retrograde in Aquarius is highlighting Saturn’s transit through this sign. Retrograde planets always ask us to review and re-evaluate the affairs ruled by the sign they are moving through as well as the houses and planets they may be activating in the personal horoscope, hence at a collective level this transit is asking us to review [ Mercury retrograde] and take responsibility for [Saturn] all things associated with Aquarius including:

Read on for some more information about the Aquarian shadow in the discussion of the New Moon in Aquarius.

Key dates / degrees
The whole retrograde phase is a potent time for reflection and review … a time when we can become aware of habitual beliefs and thought patterns and make the adjustments necessary to align our thinking with the person we are now. This is a great time to meditate, reflect, research, seek answers, sort out your paperwork, return calls and generally attend to all the things you have been too busy to do earlier.

Remember, Mercury retrograde always provides us with the opportunity to free our thinking from habitual ruts and develop a more conscious set of mental attitudes and beliefs.

This is the major transit for 2021 and the aspect perfects on:
This cycle is said to be the basic engine of western industrial society & free enterprise. It speaks of the practical application of science / technology / invention i.e.: - the New Technology and all its gifts and challenges. It highlights the tension and relationship between:
The shadow side of these transits evoke images of exploitative capitalism along with the rape of the earth and traditional cultures in the search for profit, while its constructive application challenges us to embrace both
As this transit has come more into focus it is becoming clear that there are two highly significant way this conflict is taking place now:


This continues on the theme from last year that erupted with the clash [square] from Eris, Black Moon and Mars in freedom loving Aries to Saturn and Pluto in more disciplined and law-abiding Capricorn. Where we stand in our view of ‘the truth’ has become very political as the clash between Uranus and Saturn manifests in many forms including:
One thing that is so clear in all this is that it is easy to spin this aspect however we want to suit our world view and there are many examples of the shadow of both Uranus and Saturn, however, as an astrologer I can say that this is a necessary encounter, and we need to find a way to bring these opposing principles in some form of relationship where they can listen to each and engage in meaningful dialogue.

This cycle began in 1988 at the conjunction of these two planets and the key points in the current cycle are:
On a personal level this symbolizes an inner conflict between the need to conform and act responsibly [Saturn conjunct the Sun] with the desire to break out, break free and individuate. Owning this energy could mean taking responsibility for our situation, being willing to make changes to outmoded structures and seeking to become more authentic without falling into the shadow of acting out / running away [Uranus] or blame /judgement /depression [Saturn].

Chinese New Year is traditionally time to honour the ancestors and let go the past year while giving thanks for safe passage to this time of new beginnings. It is also a time to ask for blessings for the year ahead. For those of you who have not set your intentions for the 2021, this New Moon can provide another opportunity to clear your clutter – physically, emotionally and mentally – and reflect on what you need to embrace to move forward in your life.

The New Moon in Aquarius is emphasizing the Aquarian archetype with 6 of the 10 major planets in Aquarius: Sun, Moon, Mercury retrograde, Venus, Jupiter and Saturn and with Mars in Taurus square the Sun Moon and Mercury there is plenty of potential for heated and dogmatic exchanges. It invites us to take a more detached perspective on our lives and to reflect on:  The constructive Aquarian archetype suggests an ability to be open to change along with an altruistic / humanitarian perspective that embrace alternative viewpoints and perspectives. The shadow of Aquarius can be rigid in its thinking, contrary, polarizing and demanding freedom to act with disregard for the rights of others and / or retreating into feelings of being rejected and marginalized that lead it to become the outsider. The urge to take polarized positions can manifest as the saboteur, outwardly and inwardly. 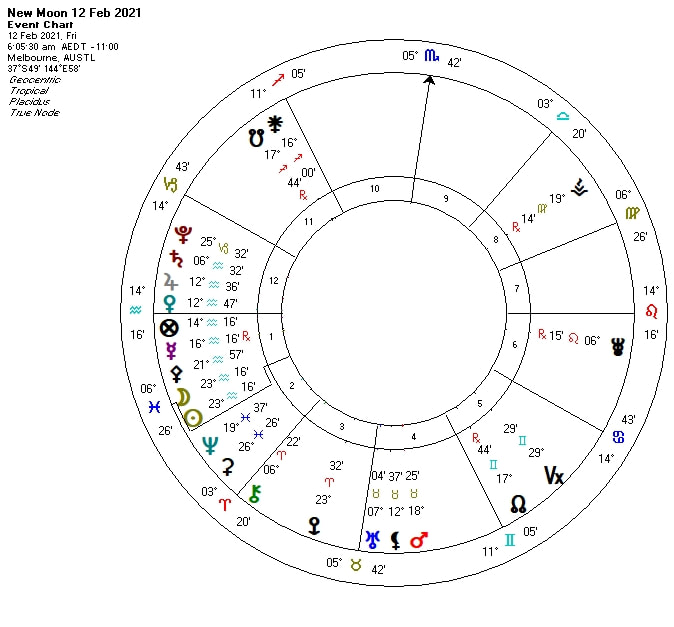 Full Moon on February 27 falls at close to 9 degrees of Virgo.

The chart has the Sun, Venus, and Neptune all in Pisces with both the Sun and Venus opposing the full moon in Virgo.  Virgo is the perfectionist and worrier of the zodiac so this full moon challenges us to find more gentleness and compassion for ourselves and others [Sun, Venus and Neptune in Pisces ] It may require letting go destructive [self] criticism and judgements that generate anxiety and alienation [dysfunctional Virgo].

The Virgo Full Moon is always a call to re-balance body, mind and spirit:  to see where we are lost in our dreams [Pisces] and lost in the everyday details and ‘busy-ness’ of our life [Virgo]. How can we create more balance between these realms?

One way this can play out is retreating into destructive escapist patterns to numb our feelings of imperfection, but the opposition is challenging us to bring these two polarities into harmony: how can we create grounded, practical rituals that enhance both our physical and psychological well being. 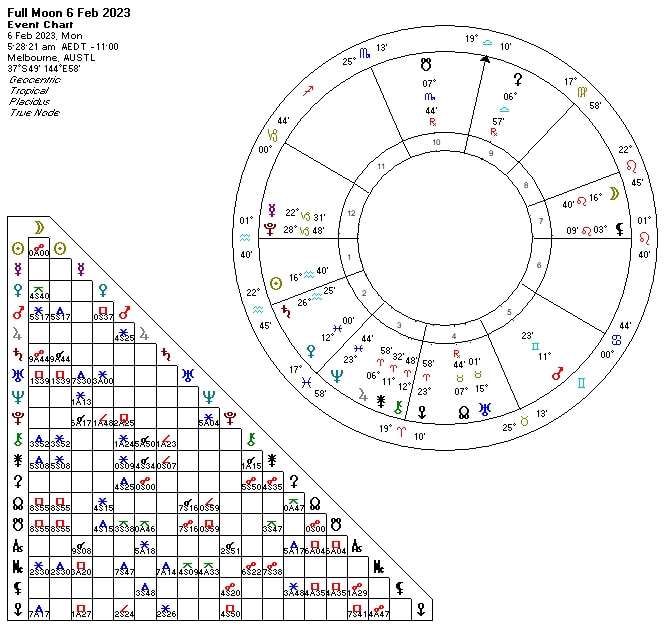 May the Goddess & God Bless You All
Christine
www.christine-rothwell.com
christinerothwell@outlook.com

Christine offers an in-depth psychological and mythological approach to astrology. These classes are suitable for those individuals who are wishing to learn more about themselves as well as those interested in becoming a professional astrologer.

Classes can be taken on a term-by-term basis and video files are provided for any classes you miss.

Advanced Group
Second Saturday afternoon each month.
The Advanced Classes give you the opportunity to integrate what you have learned through a seminar format that allows exposure to more advanced techniques and psychological perspectives, plus the opportunity to develop your delineation skill. Our first topic of study for 2021 is Synastry: the study of relationships.