This newsletter is free. To subscribe just send a blank email with the subject SUBSCRIBE from the email address you wish to subscribe from – likewise to UNSUBSCRIBE.

June is a remarkably busy month, astrologically speaking so there is a lot to share. If it’s too much just skim to the parts that interest you. Here’s an overview of what I am covering:Blessings
Christine Rothwell
Email: christinerothwell@outlook.com
Website: www.christine-rothwell.com

Contents
June begins with Venus, Jupiter, Saturn, and Pluto all retrograde with Mercury joining them on June 18 and Neptune on June 23.
Note: All the dates below are for Australian Eastern Time.
June is a very busy month, astrologically speaking, with six of the ten major planets retrograde for all or part of June:  Mercury,  Venus, Jupiter, Saturn, Pluto and Neptune. This energy is inviting us to look at things from a new, more objective and considered vantage point .

The dominant heavy retrograde energy may slow things down [both the virus and the economic recovery] but it offers us a gift: the time to look at things from a new perspective and develop a more objective viewpoint. It suggests a time of reflection on the past, and a need to refocus before we move forward, personally and collectively.

All these planets except Neptune are retrograde in the charts for the two eclipses and the solstice This suggests the need for review leading to fresh perspectives will be with us over the next three months as the charts for the solstices and equinoxes [also called the cardinal ingresses] are said to influence the collective until the next cardinal point is reached; this will be the September  Equinox.

Key times for reflection and potential insight / illumination will be around:
The collective [global] energy still looks challenging as we have the second square from Eris to Pluto on June 15 and to Jupiter on June 27, along with the second Jupiter conjunction with Pluto on June 30. These transits highlight the power struggles taking place both within nations [open up or stay safe]and between nations [who is to blame]along with the competition for scarce resources which now seems to be shifting to priority access to any vaccine that may prove effective as well as effective personal protective equipment. Eris is also at work in the conflict over how fast to open communities after lock-down [especially visible in the USA] and the motivations of various nations in wanting an inquiry into the source of COVID-19. Some nations see this from a more scientific perspective, others an opportunity to apportion blame and score points politically. The higher energy of Eris asks us to focus on the latter.

The shadow side of Eris revels in the current chaos and discord while Her higher energy exposes hidden truths and challenges us to embrace the disenfranchised. Heart centered leadership can bring people together while ego driven leadership will create deeper divides. The discussion about the transformative power of communities working together feels part of the higher energy of Eris, along with transformational leadership.

June 4 Inferior Conjunction of Venus with the Sun
Venus completes Her retrograde phase on June 25 but does not leave the retrograde loop until July 29. Remember …Venus is at Her closest to Earth while She is retrograde, calling us to reflect on whether who and what we find closest to us is a true reflection of our values.

Key dates in Her retrograde cycle
The new Venus cycle begins in the middle of Her retrograde phase - June 4 - with the conjunction of Venus and the Sun at close to 13 Gemini. The conjunction evokes the image of the Inner Marriage with the Divine Feminine [Venus] meeting with our core self [Sun, identity, purpose, and ego]. This is a potent time for meditation, reflection, ritual and inner work of all kinds.   This new Venus cycle is beginning in the sign of Gemini, suggesting potential initiation through working with the shadow side of Gemini. My sense is that this is an invitation to look at where we can be split and recover greater wholeness particularly regards:
Sit with any shifts while Venus is still retrograde. The time after Venus moves direct and re-covers the degrees of the zodiac that She has moved backwards over –June 25 to July 29– is the time to start to move forward and honour the insights of the retrograde phase. With Mercury stationing retrograde on June 18 I would suggest waiting until after Mercury moves direct on July 12 as there may be more to process than meets the eye.

The Full Moon /Lunar Eclipse in Sagittarius
The Full Moon / Lunar Eclipse on 6 June falls at close to 16 degrees of Sagittarius, emphasizing the Gemini / Sagittarius polarity, and highlighting issues around communication, speaking our truth, sibling relationships, learning,  understanding how our mind works and highlighting our beliefs systems. The Sagittarian quest is the Search for Meaning, hence this full moon invites us to step back and see the bigger picture in our lives and expand our awareness and sense of what is possible for ourselves and humanity…this is a recurring theme with the current retrograde focus. 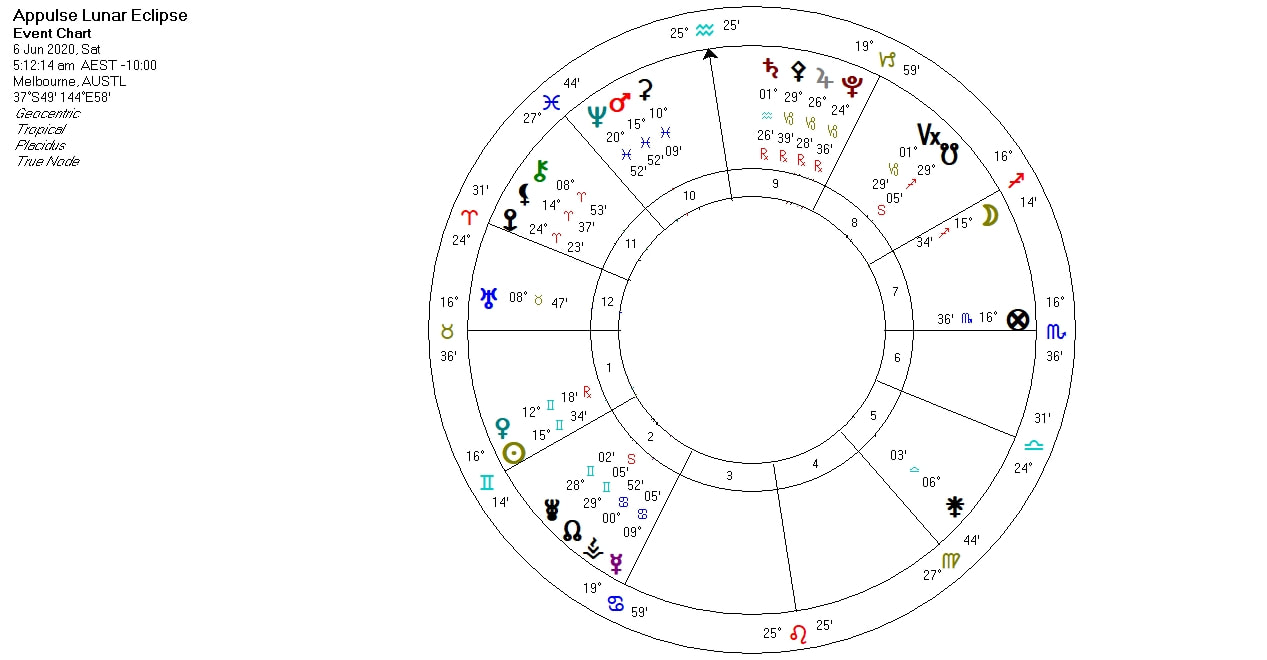 Both the lunar and solar eclipse form squares to a Mars Neptune conjunction in Pisces with Mars/ Neptune forming the apex of a t-square. At its highest-level Mars conjunct Neptune is the Spiritual Warrior and it invites us to maintain our ideals and be willing to fight for them. Its shadow suggests conflict [Mars], and perhaps ideological conflict on the collective level. With Neptune active it may be challenging to know who or what is true.

However, this energy can also be highly creative if we can own our confusion and allow the fog to lift in its own time. Neptune always challenges us to surrender to feeling and not act until something ‘feels right’: in other words, we are challenged to listen to our intuition. If you can allow yourself not to ‘know’ the answer immediately and re-frame anxiety as part of the creative process, then the outcome may be more constructive and illuminating.

Mercury Retrograde on June 18
Mercury moves retrograde on June 18 at close to 15 degrees of Cancer and remains retrograde until July 12 when it turns direct at close to 5 degrees of Cancer. As the new cycle begins in Cancer, we are being challenged to re-evaluate all things connected with our Cancer patterns, a theme repeated in the New Moon Solar Eclipse 3 days later.  [see below]

Key dates / degrees
The whole retrograde phase is a potent time for reflection and review … a time when we can become aware of habitual beliefs and thought patterns and make the adjustments necessary to align our thinking with the person we are now. This is a great time to meditate, reflect, research, seek answers, sort out your paperwork, return calls and generally attend to all the things you have been too busy to do earlier.

Remember, Mercury retrograde always provides us with the opportunity to free our thinking from habitual ruts and develop a more conscious set of mental attitudes and beliefs. Concerns may arise early in the retrograde phase but around the time the new cycle begins on July 1 when new solutions and insight may emerge.  Sit with your insights until after July 12 when Mercury goes direct. The next few weeks are the time to express your insights and put new plans into action.

The Cancer New Moon / Solar Eclipse on June 21
This is the last solar eclipse in the Cancer Capricorn polarity that has been a feature of the last few years. It feels incredibly significant that the eclipse falls on the day of the Winter Solstice here in Australia [the Summer Solstice in the northern hemisphere]. For the southern hemisphere it holds potent images of new beginnings as this solstice heralds the rebirth of the Sun.

It is significant that this is a north nodal eclipse, challenging us to expand our awareness of what is possible and push beyond our comfort zones …new concepts of community and  belonging can arise from the ashes of the pandemic if we are open to this. However, as with all astrological configurations there will be some people / communities / nations that embrace this potential and others that do not.

Generally speaking, the eclipse in Cancer invites us to reflect on family, the past and our emotional connections and bonds and all things ruled by this watery and emotional sign.  It suggests that this is a potent time to ask ourselves what nurtures us; review emotional attachments; reflect on what home and belonging means for us and explore new ways of feeling safe, nurtured and contained …all very relevant during this challenging time.

All eclipses can herald a crisis, but they also provide the opportunity to wipe the slate clean and start again. Eclipses tend to be neutral energetically, but they function to bring to the surface whatever has been buried, hidden, and repressed.

Meditation, quiet self-reflection, and any form if inner work allows the messages from our soul to be heard and the stillness needed to align with the creative and reorganizing potential of both the solar and lunar eclipses. 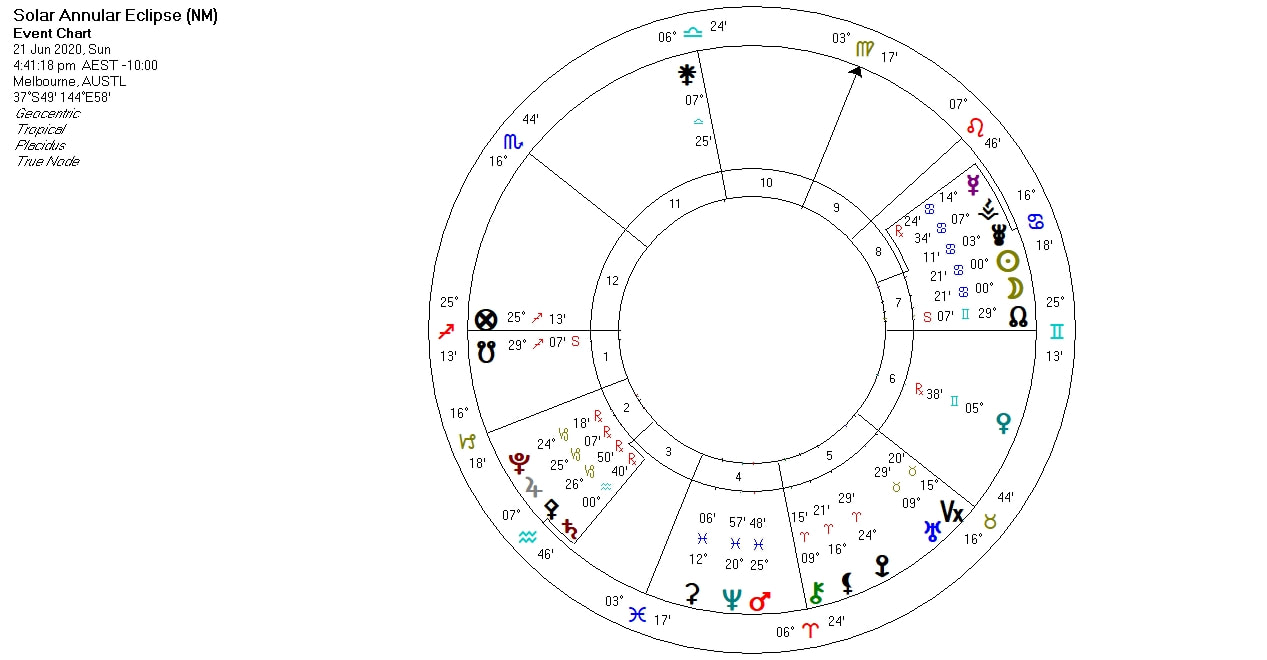 All classes have shifted online for the time being. They are still held weekly in my Zoom Room.
Please contact Christine for more information

Christine offers an in-depth psychological and mythological approach to astrology. These classes are suitable for those individuals who are wishing to learn more about themselves as well as those interested in becoming a professional astrologer.

First Year/ Beginners’ on Monday evenings from
Second Year / Intermediate on Thursday evenings
Advanced Group: Second Saturday afternoon each month. The Advanced Classes give you the opportunity to integrate what you have learned through a seminar format that allows exposure to more advanced techniques and psychological perspectives plus the time to develop your delineation skill.

Please ring or email for a brochure.
christinerothwell@outlook.com
Or
www.christine-rothwell.com
For more information

AN INITIAL CONSULTATION explores the soul’s journey as revealed through the personal symbol of the birth chart.  The focus is on the potential inherent in the birth chart and the challenges that need to be embraced in order to realize this potential.
Other readings available include:
In-depth Consultation: Two hours to explore both the soul’s journey [see above] and the year ahead. Includes 2 supplementary e-booklets.
Chart Up-date: The Year Ahead: Explores the year ahead from a psychological perspective.
Understanding Your Child: A wonderful gift for new parents and explores a child’s unique needs, motivations, potentials and challenges.
Relationship Analysis: Helps explain the dynamic between two people to facilitate their understanding of each other and their relationship.
Relocation:  Explains how a different location may impact on your psyche. This can be helpful if you are thinking of re-locating and can be included with any of the above consultations.